International Conference “Media and Data - Who Chooses the Program?” 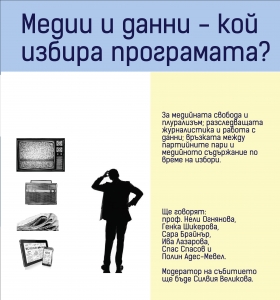 The meeting “Media and Data - Who Chooses the Program?”, organized by the Institute for Public Environment Development, was held on 27th of July, 2019 at the French Cultural Institute in Sofia.

The participants had the opportunity to discuss topics related to the current state of media pluralism in the European Union and specifically in Bulgaria; the link between democratic media environment and public governance; innovative approaches in the field of investigative journalism and the contextualization of information; the influence of parties over the media content (with a focus on the election campaign period) and the role of party funding in this process.

Speakers at the event were Prof. Nelly Ognyanova, the investigative journalist Genka Shikerova, the director of the Research and Strategy Department of the “Center for Responsive Politics” Sarah Bryner, the Executive Director of the Institute for Public Environment Development Iva Lazarova, the journalist Spas Spasov and Pauline Adès-Mével - head of the European Union and Balkans desk of “Reporters without Borders".

Mrs. Silvia Velikova, journalist in the Bulgarian National Radio, was moderator of the event.

The meeting took place with the financial support of the “America for Bulgaria” Foundation and the assistance of the Institut Français Bulgarie.